The return of our very own Kevin Flynn 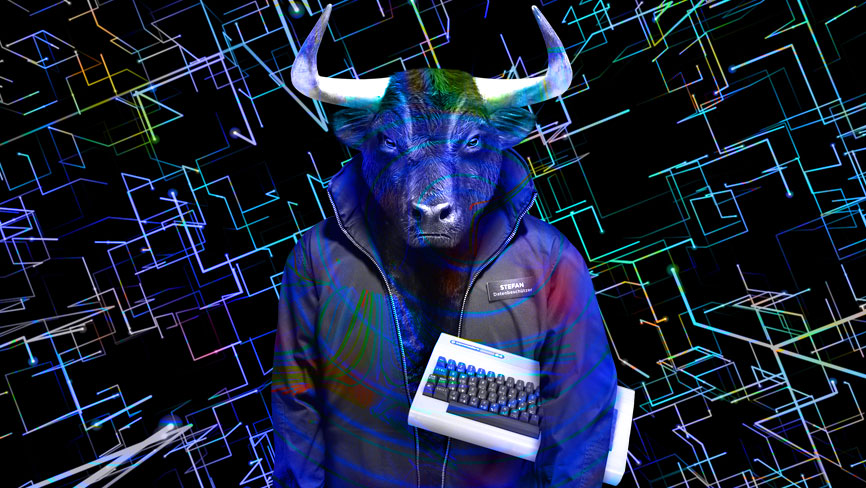 Are you familiar with the movie Tron, written and directed by Steven Lisberger? Despite the fact that it was first released back in 1982, the themes it addresses are every bit as relevant today as they were then. To steer away from spoilers, I’ll only say this much: In the film, Jeff Bridges portrays programmer Kevin Flynn, a man who is forced to overcome immense challenges in both the virtual and the real computer world in order to achieve his dreams. Much like Kevin Flynn in this science fiction film, our fellow colleague Thomas had a similar fate in real life – even if his story begins a bit like a fairy tale. But read for yourself – you’ll see.

... a long, long time ago in a galaxy far, far away ...” No, wait – that’s George Lucas telling a different story. It did all start a number of years ago – with a Commodore C64, a home computer – but it wasn’t in another galaxy. And these computers, which were pioneering at the time, were instrumental in driving digitalization’s triumphant advance. So, to start again from the beginning:

Once upon a time, there was a young man named Thomas who, at a very early age, discovered his passion and talent for technology. When he was just seven, Thomas received his first computer, the aforementioned Commodore, laying the groundwork for his education and his career trajectory. He graduated from the secondary technical school for EDP and organization in Leonding in Upper Austria, where he also gained initial professional experience as a programmer. Thomas was working in IT, “his” industry, but he kept an open mind about a possible career shift – and jumped at the chance when it came along.

"Back to the Future“: Getting started at Fabasoft

Back in 2000, after about a year working at his first job, Thomas heard about a vacancy in UI Development at Fabasoft. A technician through and through, he recognized Fabasoft as a trailblazer that was playing a pivotal role in shaping the future of software development and cloud services. His job application was promptly met with an invitation for an interview. Given his existing employment, the meeting took place during a lunch break – and went so well that Thomas even signed the employment contract right on the spot. “I was totally inspired by Fabasoft’s strong technical focus and profound level of expertise, which extends right up to the C-suite. The palpable sense of drive and desire to ‘roll up our sleeves’ at all organizational levels were also crucial factors for me, because they’re so much in line with my personal values,” explains Thomas, describing his decision to join Fabasoft and his enthusiasm for the company.

Soon after, Thomas began working as a software developer at Fabasoft’s headquarters in Linz. Thomas was always focused on the big picture and always striving to set things in motion and make an impact. Accordingly, he embarked on a career in engineering. After a few months, he moved from UI Development to Fabasoft eGov Suite and landed a leadership position. In addition, Thomas made an active contribution to the birth of Fabasoft app.ducx, the use-case-oriented development environment for business applications. Professionally he had reached his goal and technically he had reached the future – director Robert Zemeckis really couldn’t have staged it better in his sci-fi trilogy Back to the Future.

Thomas’ life took a new turn when he started a family. In this respect at least, there are parallels with Sean Anders’ comedy Life Unexpected. He also put his house-building plans into action. As with everything else, Thomas put his all into this season of his life. He demanded total commitment from himself, both professionally and personally, and sought to live up to his standards of perfection in every respect. For the sake of his wife and three young children, he decided to leave Fabasoft in 2007 after seven years. The move happened quickly, and Fabasoft lost a valuable expert.

In the ten years that followed, Thomas got to know the IT industry from an entirely different vantage point. His professional life was overshadowed by a host of rules and complex processes that left little room for flexibility. Thomas found himself living in a regulated work environment that failed to make him happy. What’s more, he sorely missed the expertise and state-of-the-art technology that he had come to know and appreciate at Fabasoft. But because the position was “financially attractive,” he stuck with it. Until one day in 2017, his cell phone rang ...

"Don't hang up!“: The phone call that led to the happy ending, or "Back to the Future II“

What Colin Farrell, aka Stuart Shepard, was not supposed to do in the film by Joel Schumacher, Thomas didn’t do either: When Harald, a senior manager at Fabasoft, called him up one particular day in 2017, Thomas didn’t hang up. Without beating around the bush, Harald offered Thomas a management position in the Engineering department at Fabasoft. They then arranged to meet, and as they say, the rest is history ...

And so Thomas, the Kevin Flynn of Fabasoft, returned to his professional home and, in his managerial role, has since been instrumental once again in contributing to Fabasoft’s success. In other words, Back to the Future II. For our purposes, we’ll skip the third part of the film series ;-). All’s well that ends well. Or as the fairy tale goes: “And they all lived happily ever after.”

But Thomas’ true story is still missing an essential element. That’s right – the answer to this question: Why did he come back? He explains it like this: “I missed the cool way people worked together and the commitment of the entire team to make a difference technologically. The blend of a top-tier corporation and a start-up, ‘the best of both worlds,’ is what makes Fabasoft so appealing.” And he’s never regretted this decision. On the contrary. Thomas is still thrilled that even with his ten-year absence from Fabasoft, both he and his talents were not forgotten, and Fabasoft made a concerted effort to bring him back to the fold. So to borrow a line from Wilhelm Busch: “And the moral of the story: Experts are most definitely what’s needed.” Or as Fabasoft’s employer branding puts it: “We really care about experts.”

P.S. Are you wondering why this article contains so many movie references? That’s an easy one. It’s because we just love going to the movies together after work. And we often do, thanks to our “beastly good” benefits – at least in non-COVID times – because “We really care about movies.”